Two weeks have come and gone since my last post. Bear with me, readers, as I try to write/post more regularly. My goal is to post once a week, but since the start of school l haven’t managed even that!

One reason (excuse?) for not posting last weekend was because I was in New York City, having some real fun with my mom and group of ladies connected in some way to Taylor University. For several years, my mom has led/coordinated trips to NYC in conjunction with the university, while I pined for the time I could come along for the fun too. This year it happened! After a couple of intense weeks of settling into my teaching role and figuring out a way to juggle to two jobs, along with laundry, housekeeping, and errands, I found this chance to “get-away” especially refreshing.

Adding to my pleasure, was the fact that I would be taking the train into the city rather than hassling with driving and parking. The Long Island Railroad station is literally across the street from the school so all I had to do was walk down the hill with my suitcase and jump on board. This was the first time I used the train because it isn’t necessarily budget friendly—especially for a family of four. I took special pleasure in the fact that I must look friendly and “in-the-know” because I had an entourage of an older couple and a young SUNY (University of New York) student ride with me into the city. It was their first time taking the train as well and they wanted to make sure they were on the correct train, etc. As if the experience of getting away for a night wasn’t pleasurable enough, the weather was absolutely perfect last weekend. The temperatures in New York are settling into their pre-fall range—highs in the low to mid 70s during the day and cool at night—perfect!

After dropping my suitcase at the hotel, I took a cab and headed to Chelsea Market. This was the designated place to meet up with my mom and the group. I was really hoping for a Gwyneth Paltrow or Sarah Jessica Parker encounter since the Market is a happening place, but not this visit.  Chelsea Market was once the National Biscuit Company, making Saltines and Oreos at one time. Today it is an urban food market with shops and restaurants/cafes. Knowing we would have a big dinner in the evening, my mom and I ate a light lunch at Hale and Hearty. We even found some room for gelato before we left.

The afternoon was open for free time so we headed back to the hotel for a bit before walking along 5th Avenue and then stopping at the lounge of the Inter-Continental Hotel for some afternoon refreshment. Dinner that night was at The Palm, one of the oldest steakhouses in the city. Because this was a tour, we had a pre-set menu. Most of us in the group ordered the rib-eye steak, which was very good, but more than we could eat. I had some of the best mashed potatoes and garlicky green beans ever. Dessert was a choice between key lime pie or crème brule.  Even though I was quite full, I forced myself to eat most of my crème brule. 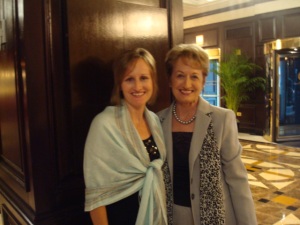 Then off to Broadway to see Evita! This was my first time to see a Broadway show and I was looking forward to the experience. Ricky Martin, playing the role of Che, was very good, and the many Latino fans in the audience loved seeing him on stage. The set was beautifully done and the chorography amazing. The physicality of the actors is impressive as they sing and dance without panting for breath! The story of Eva Peron is really quite sad so that would be my only critique about the show. If you want to see a fun-loving, upbeat show on Broadway, this isn’t the one to see.

Saturday dawned just as lovely as Friday and after a yummy breakfast the tour headed down to the 9-11 Memorial. Along the way, the tour guide was helpful in pointing out the various historical buildings and sharing bits and pieces of interesting facts about the city. Walking through the Memorial was moving and sobering. The two 30-foot waterfalls mimic the footprint of both towers and etched into the structures outlining the waterfalls were the names of the victims. I felt similar to way I did when I first saw the Vietnam Memorial in Washington D.C–so many names!  Each of the names represented someone’s father, mother, wife, husband, brother, sister, and friend. 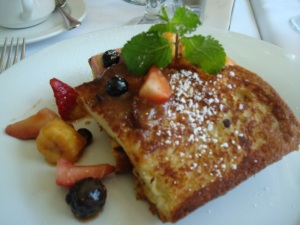 After visiting the Memorial, we toured a few more spots before heading to Central Park for brunch/lunch at The Boathouse. The park was filled with walkers, runners, carriage riders, and tourists all enjoying the beautiful day. Situated on the pond where individuals can rent boats, the restaurant is filled with light and noise. I loved the full-length windows that looked out onto the water, but it was nearly impossible to have a conversation with anyone unless that person was seated right next to you. The service was attentive and the food very good (I had the best crab cake for my appetizer—mostly fresh crab without a lot of fillers, and then Challah French Toast with caramelized bananas soaked in Grand Marnier for my main course).

My time in the city drew to an end after lunch as I needed to catch my train home. Filled with good food, good memories, and refreshed by a break from ordinary life, I tucked my NYC adventure away in my mind for future recall. In a few weeks, the grind of daily life will most likely weigh me down and I will need to remember the fun I had on this trip to spur me on until the next adventure.

This site uses Akismet to reduce spam. Learn how your comment data is processed.

September Review: My month began in Wichita at the Spiritual Life Center—a place where deep growth has happened since starting my MA @friendsu. Then, a quick trip to Pittsburgh to move @anna.brums home before her study abroad trip. The month ended with an overnight on the AT (near Salisbury, CT) with my favorite hiking partner.
Saying goodbye is never fun. But, I’m excited for this girl’s upcoming adventure. After a year’s delay due to Covid, her study abroad semester is finally happening.
Wichita Bound—residency #3!
Colorado: Crested Butte & Ouray—last pics